There are over 100 known goldfish types. 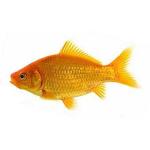 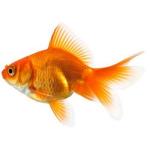 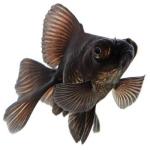 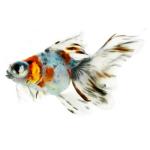 We will be concentrating on the more common goldfish types available, as some varieties recognized in China or Japan are rarely seen outside their respective countries.

This page gives an overview of the 4 major physical attributes that distinguishes one goldfish variety from another.

The major physical attributes of goldfish are:﻿

Within the major physical attributes, there can be several variations. An example of this is single caudal fins. They can be:

Some of these variations are a requirement for a particular variety. For instance a Comet goldfish should have a tail as long as the body with pointed ends.

Metallic scales.  Goldfish with this scale type have a shiny metallic appearance, hence the description.  They can be a single color or have two.  Any black coloration found on a metallic goldfish will be because of injury or it has not yet finished changing color.  Black Moor goldfish are the exception to this rule.

The majority of goldfish sold are metallic scaled.

Nacreous (calico) scales.  These fish lack the shine of the metallic fish.  The scales are missing the top layer of pigment so are semi transparent.  Fish in this scale group usually have mottled coloring made up of several colors such as red, black, blue, white and every color in between.

Nacreous goldfish will often have a few scattered metallic scales or metallic gill plates.  These are not desirable on show quality fish.

Matt scales.  Fish with matt scales have fully transparent scales.  These fish display very little color or none at all and appear pink.

There are really only two major caudal fin variations, single and twin.

Within these two types, caudal fins can be long, short, pointed or rounded at the ends, forked or have no fork at all, depending on the goldfish type.  The rest of the finnage generally follows the caudal fin form.

Sometimes single tailed fancy goldfish are called nymphs, but they are only poor specimens that shouldn’t have made it past the first cull.

The only other major fin variation is goldfish with a missing dorsal fin.  These varieties include the Celestial, Water Bubble Eye, Ranchu, Pompom and Lionhead.  These goldfish are some of the most highly developed.

There are three body shapes:

All goldfish varieties started with the Prussian carp which was selectively bred for color variations.  The Common Goldfish was the first goldfish variety developed.

For an overview of the most common goldfish varieties available, I have grouped them by their major physical characteristic, for example all single tailed goldfish are in the same group.

At the top of each list are the least developed goldfish, moving down to the most developed at the bottom.  Click on each link to be taken to a detailed page on the type.