The Lionhead is the Chinese version of the Japanese Ranchu. 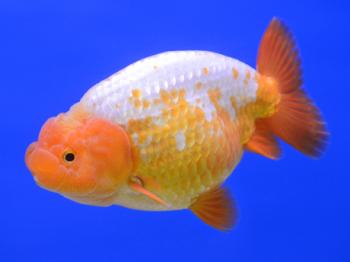 The raspberry like growth on a Lionhead goldfish is caused by an abnormal growth of cuticular tissue and is commonly called a hood.

To enhance the appearance of this hood, the top of the head has been broadened to give a good base for the hood to develop on.  This feature is something to look for when selecting young as future breeders.

The hood on a Lionhead should cover three areas, and the amount of growth should be the same:

The hood development should start to appear about 120 days after hatching.  Maximum development can take four to five years, when large areas may be shed.  Males produce better hoods than females.

Hood development is greatly affected by the way the fish is raised.  Water quality, temperature and diet all play a part.  It is believed that water with algae present hinders the development of the hood.

Feeding large amounts of tubifex worms and bloodworms is also recommended, but finding large enough supplies of these types of food is a problem for most.

The best Lionheads are yellowish-gold with a contrasting red hood, but specimens can be found with the usual metallic variations of mixed red and white or all white.  It is normal for the hood to be the same color as the body.

Lionhead fry need to be viewed from the side in an aquarium as soon as dorsal fins start to show to allow fish developing them to be culled out.  Back profiles can also be viewed for smoothness and contour at the same time.

Caudal Fin: Paired, must be short and forked

Distinguishing traits: A raspberry like covering over the head area including the gill plates and cheeks

Breeding:  The hood development can be so great that the eyes become covered.  If the males’  eyesight is hindered by hood growth, an uncluttered breeding container is required so the female doesn’t have the opportunity to hide.

Male/female differences are less obvious outside the breeding season because of the short round body shape.  Often the female will have a slimmer body shape than the male giving the impression she is male.

The absence of the dorsal fin isn’t a stable characteristic with Lionhead goldfish .  If 40 percent of the fry lack a dorsal fin, that is considered a very good percentage.

Special requirements: Not to be kept with normal eyed goldfish if eyesight is impaired by hood development.