After a successful spawning the hard work really begins. 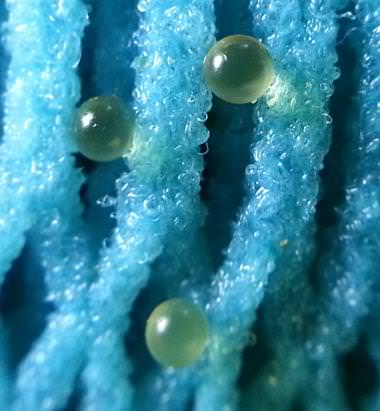 Raising goldfish fry to adults after a successful spawning isn’t easy.  Few know how to raise quality goldfish that are worth the time and hard work it will take.

What usually happens is a large number of fry are produced, and then large numbers die off due to inadequate food, disease and poor conditions.  Those that survive are the ones that hatched out first, got to the food first and therefore grew the fastest.

Unfortunately, these few individuals are often not of the best quality. If twin tails are the standard for the type, they will have single tails; if dorsal fins are meant to be absent they will have one.

As someone once said, “it takes just as much time and effort raising goldfish of inferior quality as it does prize winning ones, so you might as well spend your time raising the latter”.

Your spawning mops or whatever material your goldfish spawned on has been flushed in clean aged water, and transferred to an aquarium.  You now need to create the ideal conditions for hatching to take place in 4-5 days.

The Correct Temperature Is Important 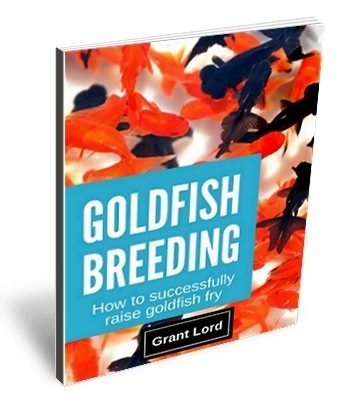 Once your Goldfish have spawned, learn how to successfully raise your fry.

The eggs should be kept at a temperature of between 70-75oF (21-24oC). At this temperature the eggs will hatch in 4 days. If the eggs are in water hotter or colder than this, the health and quality of the fry will be adversely affected.

The eggs should be aerated to ensure adequate oxygenated water is flowing around the eggs.  The aeration also helps break up any scum that forms on the surface of the water.  More on this later.

Don't try to remove the infertile eggs as some suggest.  It is near impossible and pointless.

Add some Methylene Blue in liquid form to the water.  Purchase it from any aquarium shop.  You only want Methylene Blue, not a concoction that may contain other chemicals.  The dose is not critical, put in enough so the water becomes quite blue.

Tip:
Methylene Blue is a dye. It will stain anything it comes in contact with, hands, clothing and aquarium equipment, so be warned. Leaving anything accidentally stained out in sunlight quickly fades it. 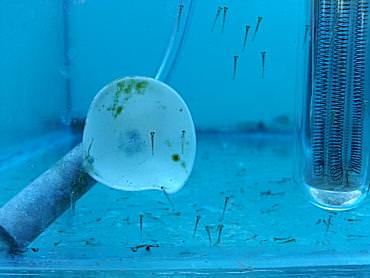 After about 2 days you should start to see eyes of the fry appearing.  Two days later the fry start to break out of their egg shells.

The fry jerk in the water as they move about the aquarium, but can’t keep it up for long.  They spend most of their time resting on the bottom or hanging tail down on the sides of the aquarium.

Make sure the water surface is free of scum because as the fry hatch, they make their way to the surface to take a gulp of air.  This inflates their air sacs which they use to swim with.  If they can’t break through the surface tension they will die.

Tip:
To remove surface scum, draw a paper hand towel across the water surface. Make one pass only, and then use a fresh towel.

The fry are about 5mm long when they first hatch.  As they break free from their shells, they swim to the nearest object and attach themselves using suckers.  For the next few days the fry use the remnants of their yolk for nourishment so don’t feed them. 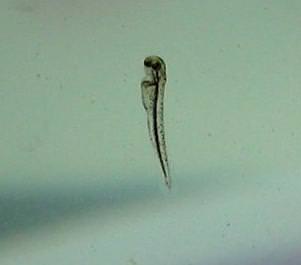 Close up of goldfish fry

At this stage you can carefully remove the spawning media from the aquarium.  Make sure no fry are caught up as they tend to bury themselves as deeply as they can into the media.

You will now get some idea of fry numbers.

In one or two days the fry will start to become free swimming and looking for their first meal.  You should have your brine shrimp hatchery built and ready to seed with brine shrimp eggs.  As the brine shrimp will take 24 hours to hatch, you should seed it in the morning, a day after the first hatched fry are seen.

Once you are sure all the fry are free swimming, siphon off the bottom of the aquarium, removing dead fry, eggs, uneaten food and any other debris.  Note: Some fry never develop their air sacs to become free swimming and sink to the bottom.  They will eventually die.

Tip:
The cleanliness of the aquarium is one of the most important things that influence how successful you will be at raising goldfish, yet it is one of the easiest to control.

Change enough of the water with clean aged water of the same temperature to remove all traces of Methylene Blue.

Install a cycled sponge type filter in the aquarium.  Any other type of filter will suck the fry in and they will be killed.  A sponge filter provides aeration as well as filtration.

Tip:
If you only have a corner box filter, take off the lid so fry sucked into the filter can escape. Make sure the sponge is a tight fit as fry are inquisitive and like to explore small cavities and will get trapped down the sides of the filter body.

Leave the heater in the fry to keep the aquarium temperature at around 70-75oF (21-24oC). Avoid any sharp drops in temperature for at least the first two weeks.
If the fry variety will develop metallic scales, raise the water temperature to 80oF (27oC) for the first few months to accelerate the color change process significantly.

The next critical step of raising goldfish successfully starts with correct feeding.  Go to the Feeding Goldfish Fry page to learn how, when, and what alternatives there are for feeding your fry.

After a week of intensive feeding, the final critical step of raising goldfish fry entails rigorous, ruthless culling.  Unless you have limitless space to spread your fry out, you MUST cull them down to manageable numbers otherwise all the fry will suffer.