The Water Bubble Eye has fluid filled sacs under the eyes and no dorsal fin. 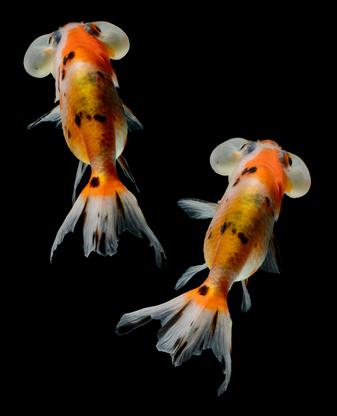 The Water Bubble Eye goldfish is one of my favorites.  Water Bubble Eyes are often confused with Celestials because of their upturned eyes.  The eyes are forced upwards from pressure caused by the fluid sacs that develop underneath the eyes.

The fluid filled sacs can be seen starting to develop at about 4 weeks and it takes up to a year for them to fully develop.

The fluid sac trait seemed to be reasonably strong in the Water Bubble Eyes I have bred.  Uneven sizes were the biggest problem.  There were also a reasonably high number of dorsal fins, spikes and irregular backs in the brood that required culling.

Water Bubble Eye goldfish need to be viewed from the side in an aquarium as soon as dorsals start to show to enable fish with them to be culled out.  Back profiles can also be viewed for smoothness and contour at the same time.

I had a very high cull rate for dorsal fins.  The male having a dorsal fin didn’t help, but I was able to get about 25 excellent fish for breeding.  When they were bred the cull rate was very high because of the throwback factor to the grandparents.

The fluid sacs are extremely fragile and are often burst.  They do re-inflate, but the size is smaller and misshapen.  This isn’t a problem for breeders, but the fish can’t be used for show purposes if the sac sizes are uneven.

There can’t be any sharp objects in their aquarium.   There should be as little clutter in the aquarium as possible with lots of open space.

Any gravel substrate must be smooth.

Caudal Fin: Paired, can be short and stiffly held or long and forked

Eyes: Normal, with fluid filled sacs under the eyes which tend to push the eyes upwards

Breeding:  The fluid filled sacs under the eyes make it harder for the males to find the female and the female to find the spawning medium.  When large sacs are present, swimming is also an effort.  Don’t clutter the breeding container as the fish have difficulty moving around.  Use as many males as possible per female, the more the better.  Hand spawning is a good option for these goldfish, but I have also bred them naturally.

Male/female differences are less obvious outside the breeding season because of the shorter body shape.  Often the female will have a slimmer body shape than the male giving the impression she is male.

The white tubercles that appear on the male’s operculum (gill plates) and leading edges of the pectoral fins in the breeding season are the best indications of gender.

Special requirements: Not to be kept with other goldfish except Celestials.