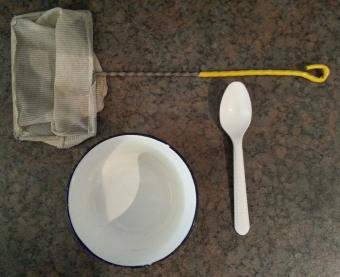 The purpose of goldfish culling is twofold:

If you have a spawning of 500-2000 fry, the danger of disease is high, not to mention the amount of food they need and the space the fry require to grow properly.

By cutting the numbers down as quickly as possible you increase the chances of achieving your main objective…raising 6 to12 high quality fry to adulthood.

If you keep too many fry, the whole brood will become undersized worthless runts.

Fancy goldfish don’t breed very true, even when the best breeding stock is used.  The more developed the variety is, the greater the number of faults that show up in the fry.

The two culling examples below highlight this.

As you can presume from above, the more highly developed Goldfish varieties produce far fewer high quality fry from a spawn.

I wouldn’t bother culling single tail varieties at this age apart from removing any larger individuals from the brood.  (There shouldn't be any if the brood is receiving enough food).

If you can cull these larger individuals for obvious faults do so, but the main point of removing them is because they will start chewing on their smaller siblings.  If the brood is large, you will need to spread it out or cut the numbers back to a manageable level.

I will describe the goldfish culling process for Water Bubble Eyes because they are a highly developed variety.  By using them I can describe several areas that need to be examined to see if the fry meet the required standard.

If your fry aren’t as highly developed as Water Bubble Eyes, just apply the appropriate standard for your variety.﻿

How To Cull Water Bubble Eyes

You will need the following equipment:﻿

To make Goldfish culling easier, fry should be hatched and grown in an aquarium or small container of around 15 gallons (60L) until they are ready for their first cull.  Catching fry as they are noticed in a large pond isn't going to work, particularly for fancy varieties.

Step one: Lower the water level in the fry aquarium to an inch (25mm), siphoning off any debris, dead fry or food from the bottom.

Using the shallow white net gently scoop up no more than 15-20 fry and suspend the net in the white shallow soup dish or similar container.  (Yes, it will be a long day if you have 3-4000 fry to cull so plan accordingly).

Tip:
If you net more than 20 fry at once, you will find it more difficult to sort them as the fry are constantly moving, and if there isn’t adequate space between each one to examine them individually, it is much harder to identify faulty fry.

Step two:  Using the white plastic teaspoon remove any large individuals.  Check that they have two even sized tail fins.  If not put them in the reject container.  Put any good specimens into their own container as they will need to be kept separate from their smaller siblings from now on.

Tip:
When I get to the last few fry, I pick up the aquarium, slowly tip it so the water and fry gather into a corner, and carefully pour them out into a smaller container.
The water level should be less than an inch deep otherwise you could crack the glass bottom pane of poor quality aquariums.

Step three:  Continue the process until all the fry are culled for size and tails. 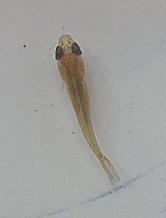 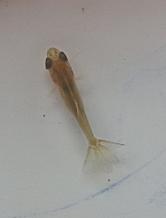 Caudal fins with excellent shape but not divided 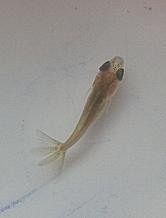 At this age and size, culling for twin caudal fins is about all you can do.  Put the larger fry in their own aquarium and the rest back into their aquarium or a small pond.

Step five:  After a further week repeat step four, then put the fry into a clean aquarium so you can examine them in profile. 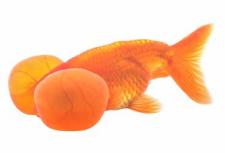 Bubble Eye with good back profile

Remove any with dorsal fins, (remember these are Water Bubble Eyes), spikes or deformed backs or anything you missed in the first two culls.

Step five should be repeated weekly until the fry numbers are down to a manageable level for the size of your setup.

At 5 weeks other characteristics start to appear.  Small bubbles start to develop under the eyes, taking another 12 weeks to complete the process.

You will notice fish with odd sized bubbles or no bubble development at all.  Remove these from the brood.

As the fry get older, minor faults will become more obvious.  Goldfish culling continues until the fry are a year old, even older in some varieties such as Ranchu where it takes years for their wen to develop fully. 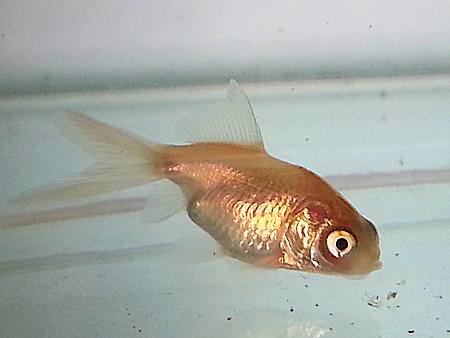 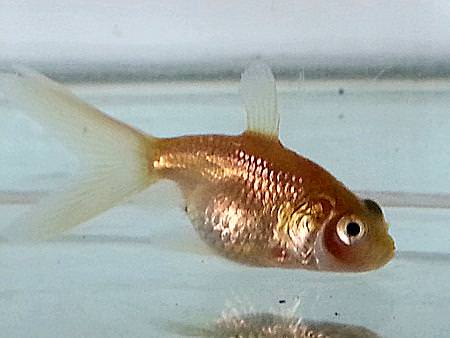 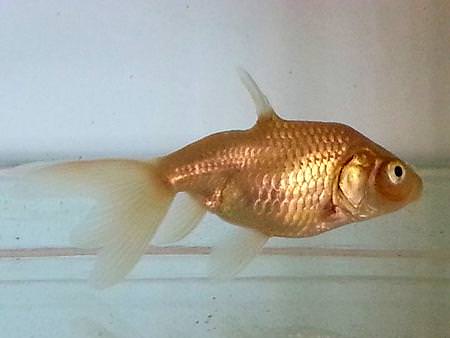 How Much Space Do I Need?

After the first cull, you need to know approximately how many fry you are left with.  From that number you can calculate how many fry you can raise to a juvenile stage based on how much space you have available.

We will use as an example a brood numbering 1000 fry after the first cull.

If you only have aquariums to raise the fry in, you would need to spread the 1000 fry across five 15 gallon aquariums for the next week, and then cull the fry down to 100 fry or less in each.

Keep culling weekly reducing the fry numbers by half each time.  It gets easier as they get bigger because faults show up more clearly.

The fry will need to be spread out or culled down further until at three months there are no more than eight fish to an aquarium.

An aeration/filtration system should be running in the aquariums and daily partial water changes made otherwise you will have to halve the fry numbers specified above.

If you have room for an outdoor pond, you will need at least an 80 gallon pond for 1000 fry.  The same rules apply when culling the numbers down until after 3 months there should be no more than 40 fish in the pond.

The trick with goldfish culling is doing it often enough so that you are reducing fry numbers down to manageable levels.  If you have a lot of room, you can cull less often.  If not, you have to cull more often and more ruthlessly, otherwise all the fry will suffer.