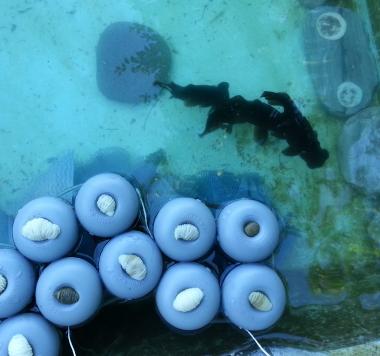 Goldfish breeding is a natural progression after you have kept goldfish successfully for a while.

Although you can get a great deal of pleasure raising goldfish you have purchased, this doesn’t compare with the satisfaction of spawning them yourself and raising the very best fry through to adulthood.

If you have some particularly nice specimens they will need to be replaced one day.  On the other side of the coin, after reading about the ideal standards for your goldfish variety, you may now realize yours aren’t of a very high quality.  Unless you purchase your fish directly from a breeder, those that survive the journey to a pet shop are never going to be high quality (unless you are very lucky).

If you can, purchase your goldfish from establishments that specialize in selling goldfish and tropical fish.  These shops know far more than the average pet shop.

Use the guides in this website to help you select the best quality fish from whatever source you choose.

At the end of the day, the best way to raise the quality of your stock is to breed your own.

Because the subject of goldfish breeding covers a large amount of information, I have broken the process into four stages:

Goldfish will spawn at 1 year, but the ideal age is between two and four years.  Fish younger than this tend to throw small numbers of small eggs.  Small eggs produce small fry which is not desirable.  Fish older than this may spawn a large number of large eggs, but the number of infertile eggs and deformed fry is high.

Unless you are lucky enough to have purchased exceptional parents, you will have to make do with what you have.  It will just take a little longer to produce that champion fish.

An interesting fact when breeding goldfish is that you are actually breeding the parents of your selected breeders. This shows itself in the quality of the fry.  Any faults in the grandparents seem to miss a generation and then show up worse in the fry.

An example of this was when I was given a pair of Water Bubble Eyes to breed by a goldfish wholesaler.

The female wasn’t too bad, good even-sized water bubbles, with a reasonably smooth back.  The male however was a disaster.  He had a long body with a dorsal fin.  No serious breeder would ever consider breeding either of these fish.  However, because of supply difficulties, I had no option.

You can guess what happened when I bred the fry…large numbers of low quality fry, even though the parents had been selected from thousands of fry and were of the highest quality.

The poor quality of the grandparents came through strongly.

Goldfish Always Try To Revert Back To Type

What I mean by this is goldfish will always try and revert back to that drab single tailed, slim bodied ancestor with a dorsal fin that all goldfish came from.  In every spawning, there will be a number of fry exhibiting very few of the desired traits of the parents (or grandparents).  If the fry should have two caudal fins, many will have one.  If the fry should have no dorsal fins, many will have partial fins or spikes.

So it goes without saying, but I will say it anyway…NEVER breed different varieties together.

I will repeat that again, it’s important… NEVER breed different varieties together.  It is hard enough raising quality fry using exceptional parents without producing a spawn of rubbish that nobody wants.  You may as well spend your time raising high quality stock you will be proud to show anyone.

We haven’t spent much time discussing goldfish breeding yet, but as you now understand, a lot of groundwork needs to be done before breeding can commence.

To learn how to identify the differences between the sexes and the pre-spawning conditioning required before you start your goldfish breeding preparation, click here.

If you have already observed your Goldfish breeding and have collected some eggs, go straight to the page on how to raise goldfish fry.