The Oranda is similar to the Veiltail Goldfish but has the hood of a Lionhead. 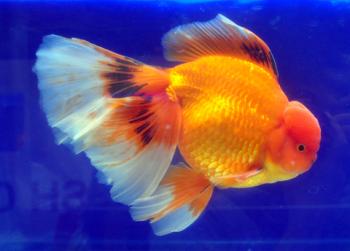 The Oranda Goldfish was thought to have originated from a cross between a Lionhead and Japanese Fantail, but this is unlikely because when bred, all have dorsal fins.  Most genetics charts show Orandas as a direct mutation from Japanese Fantails (Ryukins).

The Oranda has long flowing fins and normal eyes.  The hood development tends to be most developed on the top of the head, with less development on the cheeks and gill plates.  Orandas rarely develop hoods as good as those seen on high quality Lionheads.

Similar to Lionheads, hood development starts to appear around the 120 day mark after hatching, with full development taking a further 4 to 5 years.

Hood development is greatly affected by water and food quality, so raising high quality Orandas is a long term project spread over many years.

A high quality Oranda will have fully divided caudal fins as long as or longer than the body.  The depth of the fork should be no more than a third of the length of the caudal fins.  The dorsal fin should be almost as high as the body is deep, and held very erect.  Twin anals and an almost spherical body shape are the final requirements.

Orandas can be metallic, nacreous (calico) or matt scaled.

Because of the excessively long fins, proper feeding is a must to avoid ragged or congested fins developing.

Caudal Fin: Paired, must be as long as or longer than the body with the fork no greater than a third of its length

Distinguishing traits: A raspberry like covering over the head area including the gill plates and cheeks

Breeding:  The fin development can be so great that movement is severely restricted.  Have plenty of open spaces in the breeding container so the breeders don’t get caught up in the spawning medium as they could have difficulty freeing themselves.

Special requirements: Not to be kept with active goldfish, susceptible to chills and poor feeding.