A telescopic-eyed Red Moor is often a Black Moor that has changed color. 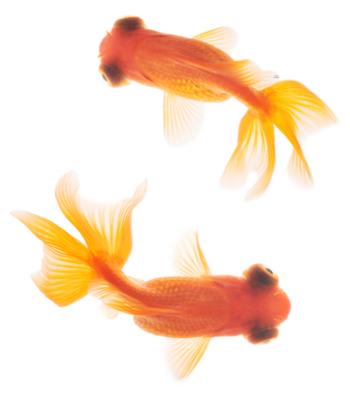 Telescopic-eyed Red Moor Goldfish are metallic scaled but Moors can be found in all three scale groups, metallic, nacreous (calico) and matt.  All three are discussed on this page. 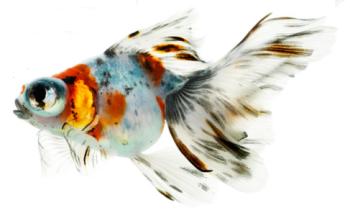 Varied and vivid colors are desirable in the nacreous variety, with red, blue, white, black, purple and yellowish-brown scattered all over the body and fins.

Another trait common with nacreous goldfish varieties, the metallic fish often take some time to color, if they do at all. With Moors the development of the eyes tends to bring on the black coloration.

Caudal Fin: Paired, can be short, long and forked or similar to a veiltail but with a small fork no greater than a third of the length.

Breeding:  The telescopic eyes make it harder for the males to find the female.  Don’t clutter the breeding container so the female can hide.  Use as many males as possible for each female, the more the better.  Another benefit  of using more males means an increased fertility rate of the eggs.

The white tubercles that appear on the male’s operculum (gill plates) and leading edges of the pectoral fins in the breeding season are the best indicators of gender.

Special requirements: Not to be kept with normal eyed goldfish.