The Pearl Scale gets its name from the raised bump that develops in the middle of each scale. 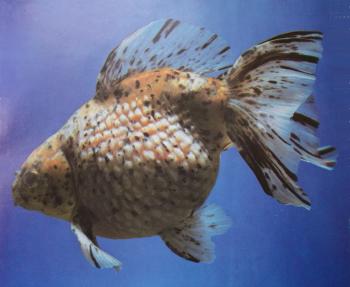 Good quality Pearl Scale goldfish will have a short very round body shape with well defined scale bumps.  The classic pattern is a red coloration with the raised center of each scale being white.

The fins on the best specimens resemble that of the Veiltail but most commercially available pearl scales have shorter finnage with forked caudal fins.

The pearl-scaling appears quite early on fry, development starting from about 2 months of age.  There is some debate that pearl scales only have nacreous scales. Pearl scales I have kept appeared to me to be metallic, but I have never bred them.

Many Pearl Scales have a body shape that resembles a golf ball.  This kind of extreme development is typical of some Chinese varieties.  This ball like shape affects the swim bladders even more than it does with all short bodied goldfish.  A lot of Pearl Scales with this extreme body shape either develop balance problems later in life and/or swim with difficulty in a head down pose.

Pearl Scales appear to the novice as having dropsy, a symptom of kidney failure.  I must admit some fish do look like a ball of fluid which resembles fish in the last stages of dropsy.

In young Pearl Scales small bladders containing fluid frequently appear where the pectoral fins join the body.  These later disappear and little is known about their function or cause.  As they also appear on other varieties where pearl-scaling occurs, it is probable that they are connected with the secretory system concerned with the pearl scaling.

If a scale is lost after the characteristic bump has developed, the replacement scale never develops the bump.  This is important for show fish as points would be lost for this defect.

Caudal Fin: Paired, long and flowing with little or no fork

Breeding:  One of the easier varieties to breed because they lack features that hinder breeding in the more exotic varieties such as telescopic or upturned eyes.  Movement is labored in some of the more rounded individuals, especially those with longer finnage, so avoid cluttering up the spawning container too much.

Special requirements: Not to be kept with active goldfish.