Three types of Shubunkin are recognized, the London the Bristol and the Japanese-American. 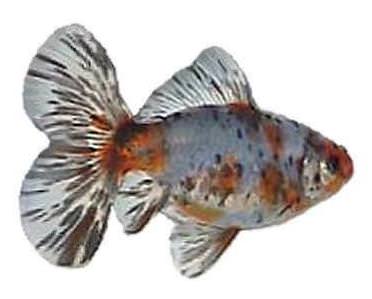 All types of Shubunkin Goldfish have similar body shapes to their wild carp ancestor.  Their coloration is calico or nacreous, with a mottled appearance of multiple colors ranging from red, orange, black, blue and white and every variation in between.

A third variant often described as the Japanese/American Shubunkin has a caudal fin similar to the Comet with pointed ends.

Shubunkins are suitable for ponds.  They are hardy active fish but tend to fade if exposed to full sunlight, so some form of shading is recommended.

The scale type is always nacreous.  The goal of breeders is to produce a fish with intense blue coloration with blotches of red, orange, yellow and brown with a stippling of black dots over all the colors.

The best specimens have few or no metallic scales present, and the gill plates are transparent, not metallic.

There is no color change in nacreous scaled goldfish.  As fry get older, colors start to appear and get more intense with age.

These Goldfish don’t suffer the digestive problems caused by poor food that can lead to balance problems in the more developed varieties with short round bodies.

Caudal Fin: Single in all types, half as long as the body and deeply forked with rounded lobes in the Bristol Shubunkin, pointed in the Japanese/American Shubunkin, similar in length and shape to the Common Goldfish in the London Shubunkin.

Scale Group: Nacreous, with all known goldfish colors able to be present.  Intense blue is the desired color, not slate blue as is often the case.

Distinguishing traits: Many color combinations are possible on a single fish.

Breeding:  One of the easier varieties to breed because they lack features that hinder breeding in the more exotic varieties such as telescopic eyes.  They are quite active fish so a large aquarium or small pond is required.