There are three Goldfish scale types, matt, metallic and nacreous.

Before explaining the differences in Goldfish scale types, it is useful to know some background information about what causes Goldfish to have three scale types when the wild fish only has one.

Goldfish have a set of pigment cells called chromatophores that react to water temperature, water composition and other environmental factors such as sunlight.

Two types of chromatophores are found in Goldfish, melanophores and xanthophores. Wild fish have an even distribution of both.

Guanine deposited in the skin causes the tissues to be reflective and bluish-gray in color.

A Goldfish’s scale type is determined by how much guanine is present and at what depth it is deposited in the skin.  The scales themselves are thin, colorless, translucent three layer constructions of collagen fibers overlaid with some mineralization.

Metallic:  A lot of guanine is present so the fish is highly reflective with the scales well defined and looking like polished metal in strong light.  The majority of goldfish sold are this scale type.  This scale type is usually a single color or two at the most.  Any black showing on the fish will be because of injury, or the fish is going through its color change.

At about 50 – 60 days old, depending on temperature, food, and sunlight, metallic fry start to change color.

The wild drab color starts to darken to an almost black coloration.  The next phase is a lightening on the lower ventral area of the fish.  This gradually works its way up to the dorsal area.  At this stage the fry are a light yellowish-orange.  Once all the black has disappeared, the fry start to darken into a bright orange-red with possibly a mix of white.

The color change process is caused by a gradual loss of black pigment, a phenomenon known as xanthochroism﻿

Tip:
Metallic fry should be kept at a higher temperature (75-80oF) for the first few months of their lives to accelerate the color change. Fry exposed to sunlight will develop far better color than those raised indoors.
Black Moor are the exception to this rule as there is some evidence that higher temperatures will encourage many fry to go through a full color change and become Red Moors.

Matt:  This scale type describes fish having a translucent or flat coloration.  There is no reflective tissue present, not even in the eye orbit which is black.  There is little color, usually there is none making the goldfish appear pink.  This goldfish scale type is the least popular because of the lack of color options.

Nacreous:  This type is a hybrid of the first two, showing a mix of translucent and reflective tissue.  Fish with this scale type can have the greatest number of colors on a fish, exhibiting reds, oranges, blue, black, white and any variation in between.

Nacreous scaled goldfish should be raised in light green water.  If they are raised in clear water under full sunlight, their colors tend to fade.  Don’t let the water become too green as the algae releases toxins. 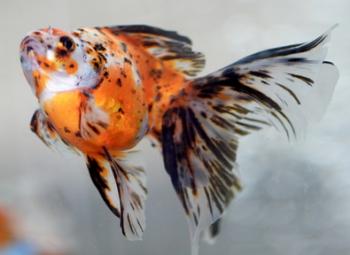 Calico:  This isn’t a scale type as such, but is often used to describe fish of any scale type that have three or more colors scattered over the body and fins.  This really only applies to nacreous fish as matt fish have little or no color, and metallic fish normally have only one or two colors present.

I will sometimes use the name calico to describe the nacreous scale type.

Cross breeding different scale types is the only cross breeding of goldfish that should be done.  It is a useful way of improving desired color characteristics.

The table below gives the approximate numbers of fry produced by scale type for all the possible cross breeding combinations.

Tip:
Metallic fish produced from metallic/nacreous or nacreous/nacreous crosses tend to be slow coloring, if they go through the color change at all. The crossing seems to suppress the color change gene, probably because nacreous fish don’t go through a color change.
Separate the best metallic fry out as soon as they can be identified, raise the water temperature to 75-80oF and keep them in strong sunlight. Those that haven’t changed color after two years are unlikely to ever change.

The three scale groups described above are easy to distinguish between, but there have been recent developments where the distinctions are less obvious.

Mock metallic – fish displaying this scale type are a single color with transparent areas of the body from lack of guanine deposits.  The gill covers are also clear (non-metallic) but the eyes are normal, not solid black or “button” eyes as found in matts and some nacreous (calico) fish.  Mock metallic fish rarely go through a color change.

Over time, the amount of guanine increases to the point that after several years mock metallics are indistinguishable from normal uncolored metallic Goldfish.

This gene was initially discovered in Shubunkins but is now spreading into other varieties.

Blue Belly – these fish are so named because of the color of their bellies when young.  They have a similar appearance to mock metallics.

The blue belly originated from metallic fish and goes through a color change, unlike mock metallics, so there appears to be a different genetic line for each.

This genetic variant seems to be limited to the US.

Pseudo matt – So called because they exhibit usual matt traits such as black button eyes, clear gill covers and have no guanine, but they have variegated colors similar to normal calicos.

Because regular calicos can display these characteristics, it can be hard to positively identify a pseudo matt.

When pseudo matts are bred with pseudo matts, the resulting fry scale types are the same as if breeding calico to calico with 25% mock metallics, 50% pseudo matts and 25% normal uncolored matts.

Colored matt – These fish could easily be taken as normal calicos, often exhibiting metallic gill plates and guanine deposits, but when bred they produce 100% colored matts, not the usual metallic, calico, matt mix.

This indicates they have a strong matt gene present and breeding them is the only sure test of whether they are calicos, pseudo matts or colored matts.