To help explain anatomical terms used on this Website, this page describes the various internal and external Goldfish parts.

The wild goldfish anatomy has no features that make it stand out from any other member of the Cyprinidae family, nor for that matter many other species of fish.

The body shape is long and streamlined for speed, the color is dull bluish-gray when viewed from above, and the fins are short.

Nature has given the wild goldfish only what is necessary to survive as a mainly bottom feeder.

Scientific Name For The Goldfish

The class Osteichthyes contains vertebrates with a backbone that have a swim bladder, paired pectoral and ventral fins, gill plates, and possess an endoskeleton of bone and cartilage.

The order Ostariophysi are Osteichthyes that have a series of small bones that connect the swim bladder to the inner ear.

The family Cyprinidae has toothless jaws.

Described below are the external features and internal organs of the wild or common goldfish. External features of fancy varieties have been changed extensively by selective breeding.﻿ 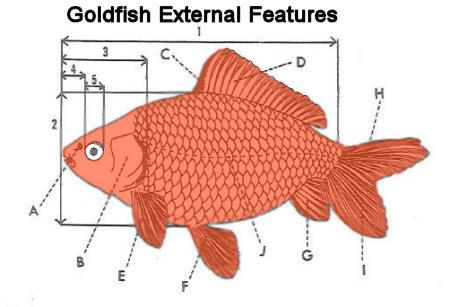 Body: The shape is long and streamlined but not excessively long as goldfish forage on the bottom for food rather than chase prey.

Fins: 5 sets following the pattern of most of the Cyprinidae family:

Caudal peduncle: Rear section of the body that the caudal fin attaches to.

Scales: Large, between 28 and 31 along the lateral line with a shiny metallic bluish-gray tinge.

Eyes: Situated on both sides of the head with little movement possible.  Goldfish are considered shortsighted, relying on other senses to find food and warn of danger.

Operculum: Gill plate, one on each side of the head.

Lateral line: A series of sensory pits running from behind the gill plates along the side of the body to the end of the caudal peduncle. It detects vibrations and water pressure changes. Thermo-sensory nerve endings occur along its length so it is assumed that differences in temperature can be detected. 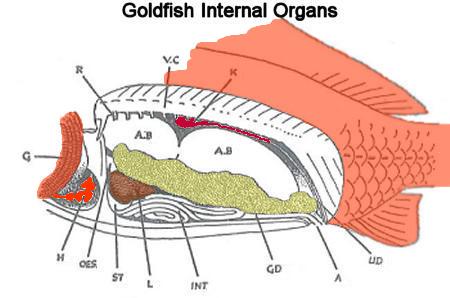 Internal goldfish anatomy is made up of all the usual organs of highly developed animals, heart, liver, kidneys, intestines, etc. as can be seen in the image.

Of special interest are the swim bladders.  There are two, situated directly behind the head and above the gut and used for balance and hearing.  Chilling or poor quality food can cause balance problems.  Especially susceptible are goldfish with short round body shapes.

Other internal parts not showing are:

Teeth: Two rows of four that bite against a hard pad forming the upper palate.

Hearing: Goldfish have no external ears but they do have inner ones. The ears are enclosed in a bony capsule on each side of the skull. Their primary purpose seems to be concerned with balance, not hearing, as their design is very rudimentary. However, when combined with a complex set of bones that link the inner ear to the air bladder, this enables the ears to pick up sound vibrations in the water.

Taste: Little is known about the sense of taste in goldfish.  There is an organ with a rich supply of nerves located on the palate.  Goldfish often take in food, have a chew, and then spit it out if they don’t like it.  This indicates they taste food before swallowing it.

In addition to tasting with the mouth, like most fish they have sensory organs that seem to function much like taste sensors located all over their body.﻿

Smell: Goldfish do have nostrils but they aren’t connected with the mouth or throat.  They are a U-shaped passage lined with sensitive cells which detect the presence of odors or substances in their environment.

There is no external physical feature of goldfish anatomy that hasn’t been changed.  By selective breeding the fins, eyes, body shape, color, scales, even the operculum and nostril orifices have been altered.

The Common goldfish most closely resembles the wild goldfish.  All other goldfish varieties have had one or more parts of their anatomy changed.

For more information on the major physical features that distinguish one goldfish type from another go to the Goldfish Types page.

For more information on the 3 different scale types and what the results are when they are cross-bred, go to the Goldfish Scale Types page.﻿