Goldfish ancestry goes as far back as the Chinese Sung Dynasty (960-1279 AD), probably even further.

Goldfish history may go back even further than the Sung (Song) Dynasty, into the T’ang Dynasty (618-907 AD), but any written records from that period are unreliable.

The earliest verifiable date referring to goldfish domestication was during the early days of the Sung Dynasty, as they were mentioned by three Chinese writers in 960 AD. From about 1030 AD there were many references to goldfish in Chinese literature, proving that from the eleventh century onwards they were a popular household pet.

The original habitat of the goldfish was in the Eastern area of China as shown on the map stretching from just below Beijing in the North to Macau in the South.

It was the selective breeding of individual fish that showed a golden color variation to the normal drab color that started a goldfish dynasty that has survived over 10 centuries and is still going strong.

Over the centuries, goldfish have been selectively bred not only for color, but body shape, finnage, scale type and other bizarre body characteristics. 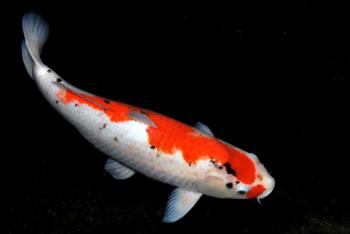 This selective breeding for characteristics other than color was different to the Koi Carp which has been selectively bred purely for color variations until the 1980s.  Since then, long finned varieties named Butterfly Koi have become commercially available.

Goldfish Movement From China To Japan

It took another two and a quarter centuries for the goldfish to make its way to Japan, about the year 1500.  A further 200 years elapsed before the Japanese started breeding goldfish.

Europe was the next destination for goldfish.  Some early writers give the date as 1691 being the year they were first introduced into England, however this is believed to be a mistake.  It was more likely to be very late in the seventeenth century or in the earliest years of the eighteenth century, around 1705.

Goldfish were introduced into France through the port of Lorient about the year 1750, and they were widespread in Europe by the end of the eighteenth century.

First Records Of Goldfish In America

It wasn’t until the middle of the nineteenth century that there was published evidence of goldfish in America. By 1889 a goldfish farm had been established in Maryland, and by the turn of the century most of the fancy breeds were known to American aquarists.

The Development Of Fancy Goldfish

Unfortunately there is no positive evidence to indicate when fancy goldfish were first developed from Common goldfish.

The first references to anything approaching fancy goldfish dates from around the year 1200 when fish with snow-white bodies and black spots are mentioned.  A Chinese publication in the year 1276 also mentions the snow-white fish as well as gold, silver and other colored fish being bred and sold at Hangchow in China.

By the late Ming period (1368-1644) a large number of multi-colored fish appear to have been developed.

The sixteenth century saw the development of the twin caudal fins as a Chinese book published in 1590 told of goldfish with three and four tails. (The Chinese counted each lobe as a tail).

There is evidence from Chinese illustrations that the dorsal-less goldfish was developed in the seventeenth century.

The Celestial goldfish has the most obscure history, as there is some disagreement about whether the fish is of Chinese or Korean ancestry.  It was well known to the Chinese in 1882, but they seem to have been known a century earlier because a fish with upturned eyes and no dorsal was depicted on a 1772 Chinese scroll.

The Comet is generally accepted as being of American descent from imported Japanese stock some time between 1880 and 1883.

Goldfish history doesn’t stop here. New varieties are constantly being developed, and others are dying out, but the varieties mentioned on this website have been around for a very long time, and will continue to flourish.