The telescopic-eyed Black Moor Goldfish starts changing to its black coloration as the eyes start to grow outwards. 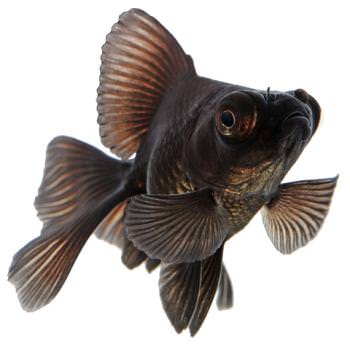 The black coloration of the Black Moor Goldfish comes from an excess of melanic pigment deposited in the scales.

Most young Moor under 30 days old are quite bronze with normal eyes, but from five or six weeks of age the black pigment begins to appear in some early developers along with the telescopic eyes.

The best Black Moors have a deep velvety blue-black coloration that covers the entire body, including the fins and ventral area.  If Black Moors show an underlying bronziness, they are likely to change color later in life, usually changing to orange or red.  Many Red Moors are just Black Moors that have changed color.  Some experts advise against keeping Moors too warm, either when they are young or when they are adults as warmer water is one of the elements used to make metallic scaled Goldfish change color sooner.

Those with an underlying white or silvery ventral (belly) area will probably remain black throughout their lives.

The British Goldfish Aquatic Societies' standards require Black Moors to be veiltails (also called broad tails), but for commercial grade specimens the fins usually resemble that of the Fantail.

Black Moor are a hardy variety, able to withstand low temperatures better than most of the fancy varieties.  They are often kept with varieties that they can't compete with for food, such as Comets.

Because of their popularity and cheapness, many aquarists make the mistake of using Black Moors as a color contrast in an aquarium full of gold colored fish.  Unless the other Goldfish are also telescopic-eyed, Water Bubbles Eyes or Celestials, the Moor won't get enough food so will get weaker and weaker until eventually succumbing to disease or starving to death.

This is why many Goldfish enthusiasts think Moors are a weaker variety that tends to get sick and die.

Being deep bodied, they will suffer digestive problems if fed low quality food with not enough vegetable matter and live food included in the diet.  This typically shows up as buoyancy problems.  Gel foods are recommended.

There is a belief that they are more susceptible to flukes but this may be because the flukes are more easily seen against the black coloration.

The large protruding eyes of this variety are particularly susceptible to damage.  Owners often find their Moor missing an eye.  This can be caused by another aquarium inhabitant, or aquarium decorations.

Losing an eye doesn’t seem to particularly bother Goldfish, but I would place the fish into a mild salt bath to guard against any infection and because quite a large amount of blood is lost.

If the fish is eating well and active, it can be returned to the aquarium after a few days.  With a missing eye, it is now at a disadvantage compared to fish with two eyes so during feeding it will need to be monitored to ensure it is getting its fair share of food.

Other aquarium inhabitants, including larger Goldfish, can easily suck an eye out of a Moor, which is another reason why Moors should not be kept with other varieties or species of fish.  A Moor shouldn’t be significantly smaller than other Goldfish in the same aquarium.

Because of their shortsightedness, Black Moor tend to blunder around an aquarium.  If startled they can easily knock out an eye on any hard objects.  If the aquarium has any sharp edges, the eye structure can be cut.  When this happens, the bodily fluids leak out, and the telescopic eye structure deflates.  It doesn’t repair itself and reinflate, the lens just sinks into the eye socket surrounded by excess skin.

The eyes vary in size and shape with each fish, some resembling smooth cones when viewed from above, while others protrude less and appear to be made up of a series of concentric circles which gradually get smaller, and finally a rounded protuberant type which has the appearance of small balloons attached to the sides of the cheeks. 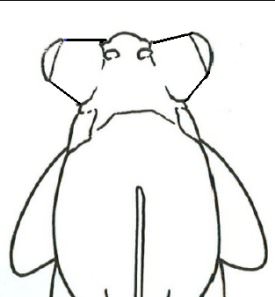 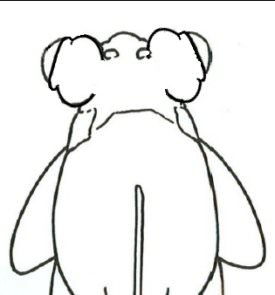 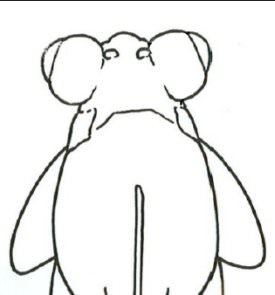 There are several other metallic scaled varieties of goldfish such as Oranda and Lionheads that are being bred to exhibit black coloration, but none have the telescopic eyes of the Moor.  The black coloration on these varieties seems just as unstable as in the Moor as they often change color when they get older.

A popular variation of the Moor is the Panda Moor that has a mainly white body with black coloration on the fins and eyes.  This coloration doesn't last long as the fish is just going through a normal color change where the black slowly fades away and is replaced by the final color, usually white.

Body Type: Deep and rounded, depth to be more than half the body length

Caudal Fin: Paired, should be a veil tail to follow the British Standard but usually forked in commercial grade fish and of varying lengths.  The American Standard allows forking of the caudal fins but also recognizes the veil tail variety.

Breeding:  The telescopic eyes make it harder for the male to find the female.  Don’t clutter the breeding container so the female can hide.  Use as many males as possible per female, the more the better as it also increases fertilization rates.

Male/female differences are less obvious outside the breeding season because of the short round body shape.  Often the female will have a slimmer body shape than the male giving the impression she is a he.

The white tubercles that appear on the male’s operculum (gill plates) and leading edges of the pectoral fins in the breeding season are easily seen against the black coloration.

Special requirements: Not to be kept with normal eyed Goldfish.