The Pompom doesn't get its name from the narial bouquets that develop from each nostril to form pom poms. 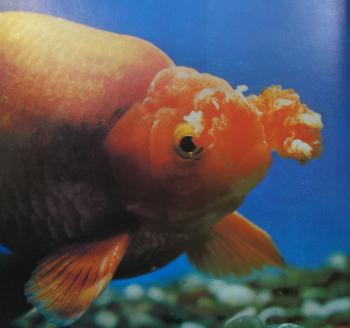 The bouquets start to develop at about 18 weeks and it takes many months for them to fully develop.  The narial growth can become so large that they are sucked into the mouth every time the fish takes in water to breathe.

Good quality Pompons should have a body shape similar to a Lionhead, no dorsal fin, and a smooth curved back with no bumps or hollows.  The narial bouquets should be well developed, being at least the size of the eye.

A Japanese version of the Pompon has a dorsal and is called the Hanafusa.  There may be a Chinese variation with a dorsal as well, but in Western countries the standard requires no dorsal fin.

Pompons need to be viewed from the side in an aquarium as soon as dorsal fins start to show to allow fish developing them to be culled out.  Back profiles can also be viewed for smoothness and contour at the same time.

Distinguishing traits: Pom Pom like development of the narial folds, no dorsal fin

Breeding:  One of the easier varieties to breed because they lack features that hinder breeding in the more exotic varieties such as telescopic or upturned eyes.

Male/female differences are less obvious in the breeding season because of the round body shape.  Often the female will have a slimmer body shape than the male giving the impression she is a male.

The white tubercles that appear on the male’s operculum (gill plates) and leading edges of the pectoral fins in the breeding season sort any confusion out.

Special requirements: Not to be kept with active goldfish.