The Celestial got its name from its upwards “celestial” gazing eyes. 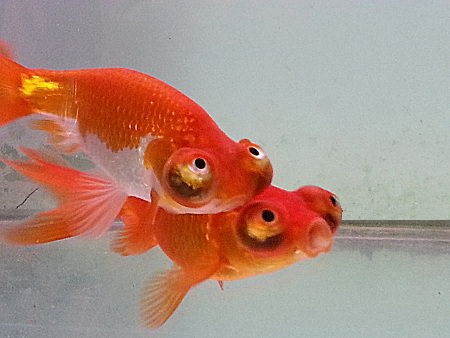 The Celestial goldfish is often confused with the Water Bubble Eye Goldfish because they both have eyes that are upwards looking.

The Celestial's eyes start as normal eyes.  After about six to seven weeks from spawning the eyes start to move outwards, then upwards, taking up to six months to complete the process.  When complete, the eyes should be looking straight up, with the same degree of upturn and size in each eye.

The eye trait seemed to be reasonably strong in the specimens I have bred, but there are always some, where the eye development stops partway through the process, or one eye doesn’t develop as fully as the other.

There are also a reasonably high number of dorsal fins or spikes in each brood.  As with all varieties that aren't meant to have a dorsal, they need to be viewed from the side in an aquarium as soon as dorsal fins start to show.

Cull out any that show such faults.  Back profiles can also be viewed for smoothness and contour at the same time.

Don’t be surprised if half the fry if not more need to be culled at this stage.

The body shape and fins can be quite long on some strains.

Country of Origin: China/Korea (there is some debate regarding origin)

Caudal Fin: Paired, can be short and stiffly held or long and forked.

Scale Type: Represented in all three scale types but metallic is the most common

Eyes: Upturned with some fish able to look into their own eyes

Breeding:  The upturned eyes make it harder for the males to find the female.  Don’t clutter the breeding container so the female can hide.  Use as many males as possible per female, the more the better.

Male/female differences are less obvious outside the breeding season because of the shorter body shape.  Often the female will have a slimmer body shape than the male giving the impression she is male.

The white tubercles that appear on the male’s operculum (gill plates) and leading edges of the pectoral fins in the breeding season are the best indications of gender.

Special requirements: Not to be kept with other goldfish varieties except Water Bubble Eyes.