This Goldfish was the first departure from the wild carp ancestor that started it all. 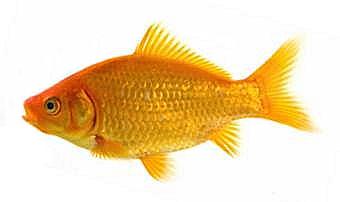 The Common Goldfish developed its orange to orange/yellow coloration from selectively bred carp that showed patches of lighter coloration.

These Goldfish are suitable and recommended for ponds.  They are hardy fish that can withstand low temperatures, and can grow quite large in the right conditions.

Because of their plain appearance, they aren’t that popular for aquariums.

Goldfish sold as the common variety that exhibit pointed caudal fins are probably just poor specimens of Comet goldfish.    The fin characteristics should be the same as the wild carp, with the caudal fin being short and rounded.

A true to type fish is hard to find these days.

The scale group is always shiny metallic.  Any fish that has nacreous scales will be a crossbred specimen or is a London Shubunkin.

The color change from the drab wild coloration to gold starts quite quickly, at about a month old.  Any fish that haven’t changed color by six months old shouldn’t be used as breeding stock.

Body Shape: Long and slender with a small head and the dorsal and ventral surfaces having a smoothly curved contour.

Scale Type: Metallic, uniform red to orange/gold color to meet show standards but can come in white, yellow or a combination of these colors.

Distinguishing traits: Physical characteristics the same as the Gibel (Prussian) carp except for color

Breeding:  One of the easier varieties to breed because they lack features that hinder breeding in the more exotic varieties such as telescopic eyes or extended fins.