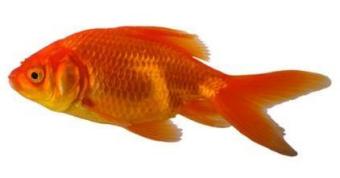 Most Goldfish diseases are easily prevented or cured if caught in the early stages.  And you don’t need fancy chemicals to cure most of the ailments.

The most common causes of diseases are:

Notice I haven’t listed bacterial diseases or parasites because they are the result of stress caused by any of the above.  They weaken the Goldfish’s immune system so giving diseases an opportunity to attack.

Goldfish purchased from a pet shop will probably have been subjected to all of the causes of disease listed.  That is why it is so important to quarantine new arrivals for at least two weeks. 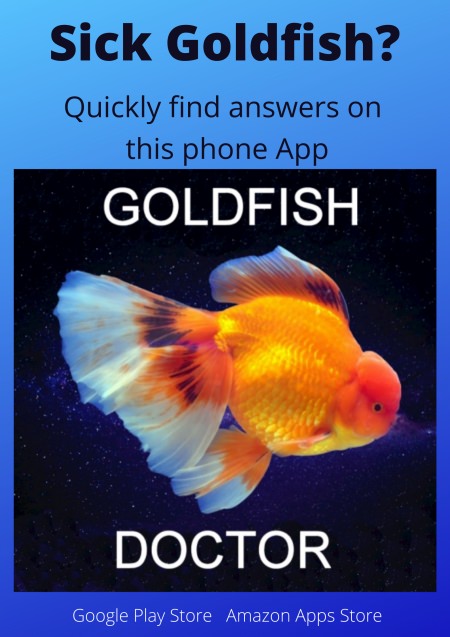 Prevention Is Always Better Than Cure

The old adage of prevention is better than cure is certainly worth repeating.

If fry get diseased, they don’t thrive as well as those that have never had an ailment.  If adults succumb, it can take months for fins or scales to recover fully.  And it may leave scarring that would exclude the fish from future show competitions.

If goldfish are kept in reasonable conditions, they very rarely succumb to any disease.

Early Detection Of Goldfish Diseases Is The Key To a Cure 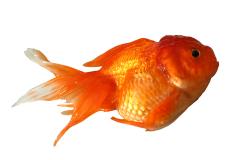 Clamped fins are a sign of an unwell Goldfish

Early detection from careful observation is the key to a successful cure.  Look for changes from normal behavior or any physical clues. Early signs of sickness can include:

A sick Goldfish clamps its fins close to its body.  If you notice a fish doing this, check if others in the aquarium are also exhibiting the same behavior.  If they are, you have a major disease outbreak and need to take immediate action.

Tip:
Check the water pH and ammonia levels. Just because the water is clean, doesn’t mean it is safe for fish. I have been caught out by this one.
I would give the aquarium a 50% water change whether it was due or not, unless you know for certain what is causing the problem. The number one cause of Goldfish diseases is polluted water.
Sterilize any equipment after you have used it.

You are looking at a complete aquarium strip down if the cause is a parasite infection. You can’t treat Goldfish in a set up aquarium anyway because chemicals added to the water will either kill the plants, kill the filter culture, sour the gravel, or do all three.  This will cause an ammonia spike that will quickly kill the already weakened fish.

One exception to this is Praziquantel based medications used for parasite control.

If it is only one fish looking sick, quickly isolate it into your sick bay using water from the aquarium it was in.

The sick bay should have no gravel or live plants, and be away from bright light.﻿

If the water tests show low pH or high ammonia readings, change 50% of the sick bay water.  Change another 50% the next day, and continue until the readings are satisfactory.  Don’t forget to replace any chemicals you have put in the water.

Make sure the sick bay has gentle aeration, and some form of filtering.  A cheap plastic corner box filter or sponge filter is ideal as it achieves both objectives.  You won’t be trying to create a natural biological culture in the filter as you normally would because bacteria killing chemicals will probably be needed in the sick bay water.

Add a few plastic plants if the fish is nervous.  Not plants from your aquarium as some chemicals such as Methylene Blue dye anything they make contact with (including skin and clothing…so be warned).

Once the sick fish is in the sick bay, gradually add some Aquarium salt to the water, about one tablespoon per gallon (3 grams per liter) over 12 hours.  Goldfish can stand quite brackish water if the change is made slowly.

I highly recommend adding some API Stress Coat Water Conditioner. It contains Aloe Vera which covers the fish in a protective coating. It has several other benefits such as removing chlorine from the water and detoxifying any heavy metals present.

Don’t feed the sick fish at this stage.

Watch the Goldfish to make sure it isn’t unduly affected by the salt.  If it starts lying on its side the mixture is too strong.  Remove the fish immediately.  Let it recover then try again with half the amount of salt.  Carefully watch it for an hour.

If your water tests confirmed that the water conditions were poor, changing the water and leaving the fish in the mild salt bath for a week should be enough.  Don’t return it to the aquarium until it is eating well, active and all fins are being held erect from the body.

Try feeding some live food to the fish the next day.  If it is recovering, it will eat.  If it doesn’t, remove the food and try the next day.

If the water tests show satisfactory readings, then the problem is fish related.

Look For Obvious Signs Of Disease

Carefully examine the fish.  You may have already reached a diagnosis because the fish is exhibiting obvious symptoms such as:

The age or size of your Goldfish can give a clue to its ailment. Young fish especially those under 2 inches (52mm) in body length are prone to gill and body flukes.

The most useful chemicals to treat Goldfish diseases are:

A particularly effective medicine I use has a mix of chemicals.  The combination of chemicals is 1.5% Methylene Blue, 0.1% Malachite Green, 0.05% Acriflavine and 0.04% Quinine in an aqueous solution.  One drop is used per liter.

As you can see, it doesn’t take much to be effective.  It is better to under dose than overdose.

Just using clean fresh water with a little salt works wonders and is the safest treatment.

Don’t be too concerned if you aren’t initially sure what the problem is.  Many Goldfish disease treatments are similar anyway and will cure multiple complaints.

You do need to diagnose if the disease or condition is bacterial, parasitical or something else such as chemical or metal poisoning.

Go to the common Goldfish diseases page that lists diseases with a short description to help with your diagnosis. Click on the link for information about the disease and its treatment.

If you know what disease your Goldfish have, go to the Goldfish Disease Medications page to find treatment options.