Congested fins is a condition that causes the veins in the caudal fin to become blood red and distended. 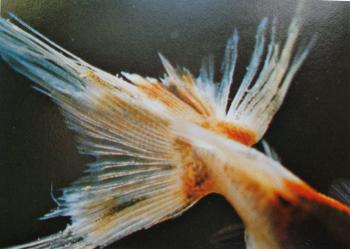 Congested fins disease mainly affects the caudal fin.  In severe cases, other fins are affected and if left untreated the fins will start to split and be attacked by fungus.

A parasite (Cyclochaeta) is often present in the advanced stages, but it is unlikely to be the initial cause of the condition.

This disease is hard to detect if the caudal fin is colored red.  It only becomes obvious when fins start to become torn and ragged.

The disease can be confused with tail rot, but tail rot starts at the trailing edges of the fins.  This disease affects the entire fin.

Poor water conditions, incorrect feeding, anything that causes the fish to be weakened will bring on the condition.

A long period of low water temperatures sometimes causes the condition to appear.

The disease doesn’t appear to be infectious to other fish but it may indicate that the water conditions aren’t good.

If low water temperatures or poor feeding practices can be eliminated as a cause make a 50% water change in the aquarium or pond, and check the filter for flow.  Also check for anything large and dead that could be polluting the water.

If nothing obvious is found, check the pH and ammonia levels.

Move the goldfish into the sickbay and add five teaspoons of Aquarium salt per gallon.

The caudal fin may need to be trimmed if the damage is so severe it is hindering the fish swimming.  Use a razor blade or a pair of sharp scissors.

Don’t feed the fish for 4-5 days if poor quality food is suspected of causing the problem.

Resume feeding with live foods such as daphnia or earthworms and green vegetable matter.

When the condition starts to improve, slowly reduce the amount of Aquarium Salt at each water change.