Live foods are a must if you intend to breed goldfish.  They stimulate the production of milt and eggs because it signals to your goldfish that there is plenty of good quality food available.

Daphnia are a firm favorite, especially for raising fry from two weeks on.  The adult daphnia are easily eaten by Goldfish. 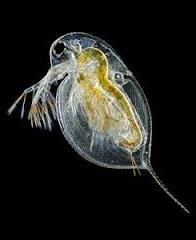 They are found in fresh water all over the world. Because of continuing urbanization, marshes and natural ponds are being filled in for housing, so they are getting increasingly hard to find in the wild.

The best option is to grow your own from spring until autumn by preparing a suitable container and seeding it from a source free of parasites and enemies of goldfish.

Go to the daphnia page to learn how to prepare daphnia ponds.

They can be collected from spring through to autumn by creating a pool of stagnant water in which the female will lay her egg raft.

These rafts can be placed in with young fry to be eaten as they hatch, or the wrigglers grown through to just before turning into pupae.

Go to the mosquito wrigglers page for more details.

I will mention bloodworms because they are often found with mosquito wrigglers.  Bloodworms are the larvae of the Chironomus fly.  They grow to about ½”- 5/8” long in the worm stage and are bright red in color. 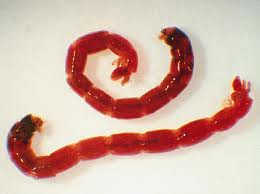 The worms make cylindrical tubes that are attached to the sides of water containers or any available underwater object.

Bloodworms can be collected by striking the water container firmly.  The worms shoot out of their tubes and swim in a figure eight movement when they can be netted.

Bloodworms aren’t as prolific as mosquitoes so I consider them a bonus if I catch any while harvesting mosquito wrigglers.

All Year Round Live Foods

White worms are small worms that grow to about 5/8th of an inch long.  They are easily raised by using a starter culture of a few worms. 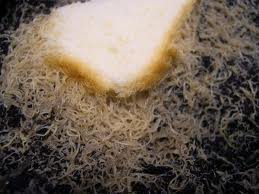 A small covered container is filled with moist sandy soil.  On top of this is placed a small piece of bread that has been soaked in milk.  The container is then placed in the refrigerator as these worms need low temperatures to survive.

You will notice that the worms gather under the bread as they feed on it.  When the culture is sufficiently large you can start harvesting the worms.

Change the bread as it gets moldy.  As the culture gets bigger, the worms will quickly eat the bread before mold gets a chance to grow.

Make sure the culture is kept moist.

Tubifex worms are found in shallow slow moving waters.  They gather in dark red clumps.  When disturbed the whole colony retracts into the mud in an instant leaving no trace of their presence. 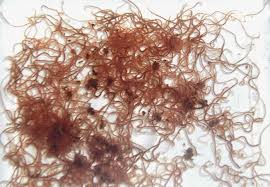 Tubifex worms thrive in water that is either stagnant, or contains a high level of sewage.

To collect the worms, a quantity of mud is scooped up and put into a shallow pan.  Place the pan under a gently running stream of water.  Stir the mud up to separate the worms from the mud, making sure none of the worms flow out with the mud.  As the worms separate from the mud they tend to clump together.

Once all the mud is gone, leave the worms in the tray for a day or two with the water gently running.  This will allow them to purge themselves of any undesirable matter they have eaten.

Earthworms are an excellent food for conditioning goldfish.

They are one of the foods available in quantity in early spring when others such as mosquito wrigglers or daphnia are in short supply. They are most active during the winter months in temperate climates if the ground isn’t frozen.  They tend to become scarce as summer progresses and the ground starts to dry out. 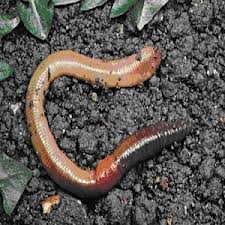 For those who are ecologically minded, you can always start a worm farm and feed them your household food scraps.

Avoid tiger worms (Eisenia fetida) that are often used in compost bins.  They have alternating red and yellow bands along their bodies and tend to be more active.

When cut up they exude a smelly liquid that fish don’t like.