Your goldfish fry are starting to free swim looking for their first meal.

Feeding goldfish fry as much food as they need as soon as they need it, but also maintaining excellent water conditions in their aquarium or pond are the most important secrets to raising fry successfully.

Keeping these two important issues in mind let’s look at the most common options for feeding fry during the most important first month stage.

Fry food options depend on the age of the fry. 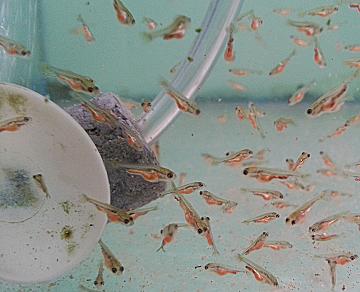 These are microscopic forms of animal life that live in water.  They are usually cultured in 1 quart mason jars or similar.

As soon as the eggs are laid you need to start a culture.  You will need many jars of the culture to satisfy an average hatching of 500 to 1000 fry.

The infusoria will satisfy the fry for about two weeks before they need something more substantial.

Mosquito wrigglers are the best food for feeding goldfish fry.  Growth speed can be doubled if you can get enough of them, which is a problem in early spring.

The way they are fed to the fry is by placing egg rafts in the fry aquarium.  As the wrigglers hatch, they are eaten by the fry.

Fry just free swimming struggle with the wrigglers even though they are tiny.  I tend to feed the wrigglers to fry about a week after they become free swimming.  The fry have no trouble eating them then.  You also avoid the problem of uneaten wrigglers becoming too big for the fry to eat, which occurs within a few hours, and having to remove them from the fry aquarium before they become adults.

To learn how to collect mosquito rafts click here.

Daphnia are a small fresh water crustacean found in still water, sometimes in such quantities that the water appears red.

Some species of daphnia can be used as a first food.  The adults are put in a fine sieve and the larvae that pass through are fed to the fry.

Daphnia supply can be uncertain, one day the water is teeming with daphnia, the next day they are gone.

Daphnia can introduce enemies of fry such as hydra that kill fry under two weeks old.

Most of us don’t have access to a good supply of daphnia these days but it is well worth considering seeding your own pond in readiness for introducing your two week old fry.

If you can get the timing right, you won’t have to feed your fry for the next two weeks.

To learn how to prepare a daphnia pond click here.

To learn how to feed and maintain a daphnia culture so you have a live food source year round, click here...

Microworms are very small white nematodes that look like tiny worms.  Sizes range from 1.5 to 3mm.  They are not to be confused with white worms that are much larger.

Microworms can be raised in any small container, a plastic takeaway food container with a lid is ideal.  The taller ones are best as the worms will crawl out of the shallow trays.

You need to obtain a starter culture from an aquarium shop or other source.  Place a thin layer of oatmeal that has been soaked in water in the bottom of a container, and on top of this sprinkle some dried yeast which the nematodes feed on.

Keep the culture covered but punch some small air holes in the lid.

Add the starter culture to the mix and within a week or two depending on temperature, a white film of micro worms will form up the sides of the container.  Scrape them off the sides with a knife or small paint brush and stir them into the water so they separate.

When reproduction of the worms appears to be slowing, make up a fresh culture.  The culture usually starts to smell at this stage.

As microworm cultures can smell unpleasant at times, keep them away from living areas.

I’ve put artificial foods last because that is where they belong…last.

If you have had a failure with your brine shrimp or infusoria culture, hard boil an egg, and squeeze the yolk through muslin so it enters the water as a mist.

Most shop bought liquid fry foods are primarily egg yolk anyway so I would avoid them.

Feeding goldfish fry isn’t hard, but for the first critical month you must be well organized and supply as much food as the fry need on a daily basis, 2-3 times daily for the first few weeks.

Tip:
If a brood is receiving the correct amount of food, the size difference between the smallest and largest fry won't be big enough for the larger fry to start chomping on their smaller siblings.
In other words you shouldn't have to separate out the larger specimens.

After the first month, you can start introducing some high quality dry food into their diet, but, dry food is never as good as live food, and the fry growth rate will drop if dry food is fed exclusively.

To raise high quality fish, live food should make up the majority of their diet for the first six months.﻿