How to Make a Brine Shrimp Hatchery.

Building a brine shrimp hatchery is very low tech and relatively cheap, but it will be one of the most useful pieces of equipment you own if you want to breed goldfish.

Items You Will Need

Note: a 1 quart container can hatch 560,000 nauplii so unless you are a commercial operation, this size should be big enough for most spawns.  (For this exercise I am using 3 liter juice containers).

Measure up 1 ¼” from the base of the two 2 containers and evenly cut off the bases.  You will use these later as lids.

The containers are turned upside down and float top down in the aquarium.

Punch a hole in the middle of the bases.  Make the holes slightly smaller than the air line you will be using.  Make another small hole in the bases at the lowest point so any water that gets into it will drain back into the container.

Push some air line through the hole in the base.  You will invert the bases and use them as lids to control evaporation and splashing.  Depending on whether you are using rigid plastic tubing or air stones, push enough air line through so the tube or air line reaches to the bottom of the container when the lid is in place.

You should end up with something as shown in the picture below.  Note the air control valve at the top, and in this example an air stone with a lead weight attached is used instead of rigid tubing. 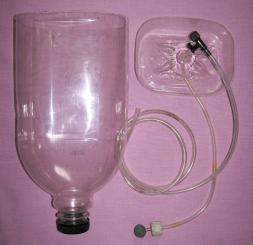 Putting the Brine Shrimp Hatchery Together

If you live where the temperature never drops below 75oF, you can dispense with the aquarium and heater and just make up a suitable stand for the two containers utilizing bases made from similar containers (see the picture below). If not, you will need to use the aquarium to keep the cysts at the correct temperature.

The left hand picture shows a 3 liter container with the top cut off.  Use masking tape or similar as a guide for the cut line.

The right hand picture shows another 3 liter container inserted upside down into the bottom section.

Even if you do use an aquarium to heat your hatchery, the stand described above is useful for mounting your hatchery in while harvesting the nauplii.
The stand tends to fog up when the hatchery is placed in it. I cut a hole in the side so I can view the neck of the hatchery where the brine shrimp nauplii gather. This makes it easier to see the siphon tube and avoid unhatched cysts while siphoning out the nauplii.

Plug in the heater and air pump.

You are now ready to seed the brine shrimp hatchery with the first batch of cysts that will start hatching in the next 24-36 hours.

If you don't want to make your own, there are a few brine shrimp hatcheries at Amazon.com

, but none look like ideal solutions. They either utilize a drink bottle as I have done or appear overly complicated.

I use San Francisco Bay Brand

brine shrimp eggs because I get an excellent hatch rate from this brand.