Goldfish growth rates depend on their environment. 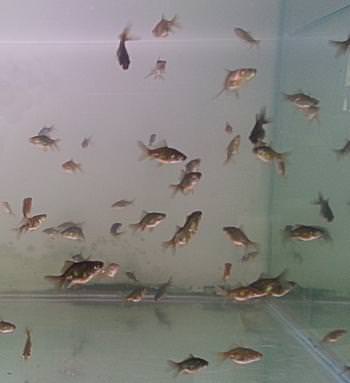 Goldfish will not thrive in a crowded aquarium.

Goldfish growth rates can be massive for their first few weeks after hatching in a perfect growing environment, as much as a 50% or more increase in body length in a week.

Goldfish growth rates are totally dependent on the conditions they are kept in, and the amount of high quality food they receive.  Goldfish kept in a crowded aquarium or bowl and only fed dry prepared foods will not thrive.

Goldfish can tolerate many different water conditions, hard, soft, acid or alkaline, but they won't tolerate water with ammonia in it or low oxygen levels caused by pollution.

Frequent water changes are required for Goldfish.  This is especially important for fry when large numbers are often kept in crowded conditions for the first few weeks.

This is why there is the widely held belief that Goldfish only grow to the size of their container.

What actually happens is the build up of growth inhibiting hormones stop the fish, and any other Goldfish in the same container, from growing any bigger.

2. Lots Of Space Or Filtration

Goldfish need 24 square inches of surface area per inch of fish, or a filtration/aeration system.

Goldfish need high oxygen levels to enable them to process the large amounts of food needed to grow quickly.

The water temperature for fry and younger fish can be higher than for adults. Temperatures around 75oF (24oC) can be used for hatching the eggs and maintained for as long as maximum growth rates are required.
Some breeders keep metallic scaled fish at 80oF (27oC) for the first month to accelerate the color change.

4. Food Type And How Much

Goldfish have huge appetites.  It has been claimed fry will eat their own body-weight of food a day if enough is provided.

I don't doubt this claim gauging from the amount of food my fry go through in a day.

Most hobbyists don't provide enough food for fry to grow at their maximum rate, which is critical for the first month.

Fry need to be fed live food for the protein.  Some high quality prepared foods can be supplemented at around week 5, but most fancy varieties need live food to make up the majority of their diet for around 6 months.

Fish must be in excellent health.  Fish under two inches (52mm) in body length are susceptible to parasites such as gyrodactylus (body flukes) and dactylogyrus (gill flukes).

If the flukes don't kill the fry, they severely retard growth.

I have used one of my spawns of Black Moor as an example of deep bodied goldfish growth rates, as most growth charts are for slim bodied varieties.

All Goldfish fry have the same physical characteristics for the first 5 weeks, so the growth rate is similar for all varieties up to that age.

After 5 weeks the deep bodied varieties start to take their adult shape, so growth rates slow when compared to the slim bodied varieties such as Comets.  Their body weight gain will be the same, but their body shape is deepening at the expense of overall length.

The growth rates shown in the chart are for Black Moor fry kept at a water temperature of 75oF (24oC) for hatching, and between 68-77oF (20-25oC) from the second week onwards. 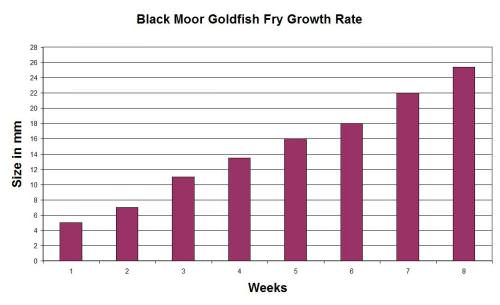 The fry have been fed twice daily with enough live food to last an hour.

If fry are fed three times daily, or provided with live food continuously, the growth rates shown can be exceeded.

The fry have pectoral fins and a median fin running along the back from where the dorsal would start, around the tail and along the underside to the vent.

Caudal fins are well defined by day 14 and the fry can be culled for single and faulty caudal fins.

The fry are fed Brine Shrimp exclusively with daphnia pulex nauplii and newly hatched mosquito wrigglers now an option for food at day 14.

Fry are complete fish with all fins fully developed and visible scales by day 35.

A few fry start to darken and eyes start to protrude.

The fry are fed Brine Shrimp, daphnia pulex nauplii and full size mosquito wrigglers.  A small amount of gel food is fed to introduce carbohydrates into their diet.

More fry are starting to darken in color and develop protruding eyes.

The fish are now considered juveniles and the objective now is to get them as large as possible before winter.

Most of the fish have darkened in color and their eyes have started to protrude.

Over the first eight weeks the fry achieved an average increase in body length of 27% per week.  This means they more than doubled their body weight each week.

To achieve or better the growth rates in the first eight weeks, the water temperature must be maintained in the mid 70s (24oC) range.

Growth Rates From Week Nine to One Year

Most of the juvenile's growth will be in the first 6 months unless they are going to be kept indoors and in a heated aquarium or at least at room temperature over the winter months.

As climatic conditions vary greatly from country to country, the chart below gives a representation of what growth rate should be achieved over 12 months assuming the fish are kept outdoors.

Tip:
If you intend to breed your goldfish, they should be wintered outdoors in their second year (if conditions allow) as a period of hibernation or lowered activity leads to increased breeding activity in the spring. 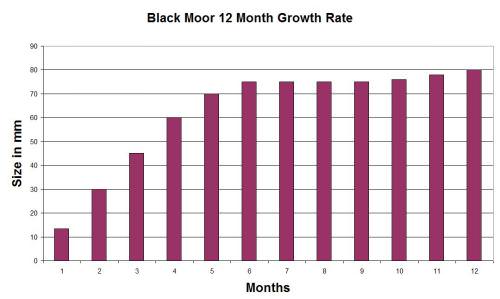