Flukes are particularly dangerous to fry and adults less than 2 inches (52mm) in body length.

I have found Goldfish flukes to be the most difficult parasite to control or eradicate.

There are two types of flukes, gill (Dactylogyrus) and body (Gyrodactylus).  They are parasitic flatworms known as trematodes that have external suckers with hooks for attaching to a host.

These hooks or haptens are known to carry bacteria which often lead to ulcers.  It is believed flukes are the number one cause of ulcers on Goldfish and Koi.

Both of these flukes are barely visible to the naked eye.  Black Moor clearly show the white 1mm long worms against their black coloration.  On lighter colored fish they are nearly impossible to see.

A goldfish’s behavior can be the only indication that it is infested.  The fish will twitch its fins, open and close its mouth rapidly or dart around the aquarium as if startled.  It will also scrape itself against any available object in an attempt to dislodge the flukes.

If any fish is suspected of having flukes, it can be assumed the rest of the aquarium or pond inhabitants will have them.

An infested fish introduced to the aquarium or pond is the usual source. As mentioned earlier, most larger fish carry a few as these parasites are extremely difficult to eradicate entirely.

Tip:
It is extremely important when breeding goldfish that the eggs are flushed with clean water and put into a container with water that hasn’t been in contact with adults.
Gill flukes are particularly dangerous to young fry under a month old and can kill off an entire brood in two or three days. The fry appear to have white beards hanging beneath their gills and if you look carefully, they can be seen moving.

There are now safe treatments available that consist of Praziquantel based tablets, powder or liquids. I have used these successfully when I hired aquariums. I was able to avoid having to strip down and sterilize the aquarium.

Most of the older treatments for goldfish flukes involve toxic chemicals. I'll list them in case you can not get a Praziquantel based treatment for some reason.  Test with caution first before committing all your goldfish to a particular treatment.  And always dose on the low side if fish are weak.  You can always increase the dosage once the parasites have been weakened or reduced in numbers and your fish has recovered from the treatment.

Here are the options:﻿

Place the fish in a container with clean water (not the sickbay).  Add one teaspoon of non-iodized salt per gallon.

Add 20 drops of formalin per gallon (3.80 liters) to the container.  Spread evenly.

Make up a second solution using 20 drops for each gallon (3.80 liters) of the container mixed in a little water.  Add this solution to the container over 10 minutes.

Leave the fish in the container for a further 10 minutes.

At the first sign of stress, remove the fish into the sickbay that has had one teaspoon of non-iodized salt per gallon added.

Repeat this treatment again after 24 hours and again at 48 hours if there is evidence there are still flukes present.  Sterilize the sickbay 12 hours after treatments to flush away shed flukes. 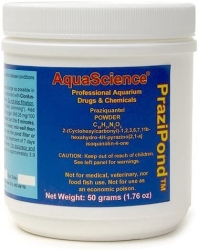 The treatments above are for goldfish past the early fry stage.  The smaller the goldfish you are treating, the more cautious you must be.

By flushing eggs and placing them in clean water, infestation is avoided.  But if you find your fry have become infested here are a couple of options.

I have not used the tablet or powder treatments on small fry less than a month old. Unless fry treatment is specifically mentioned in the directions, halve the recommended dose and test. You will see the flukes, especially gill flukes reacting violently to the medication if it is hitting the mark.

Add 24 tablespoons of Aquarium salt per gallon to a container of water.

Dip the fry for 30 seconds and place in the sickbay that has had one teaspoon of non-iodized salt per gallon. Again I repeat...test with a few fry first.

If the fry don’t appear too shocked, repeat in one hour.