Goldfish spawning success depends on how much preparation there was beforehand. It all starts with...

It goes without saying that the goldfish you have selected for breeding have been given the best possible care, and lots of room for the last one to two years. They haven’t been stunted by overcrowding or a poor diet.

Don’t assume that just because you have decided to breed your goldfish they will perform on demand.  They won’t.  They aren’t guppies.  The more exotic the variety the harder it is to produce a successful goldfish spawning.

Conditioning should start in autumn, not in spring when there is little time to get the breeders into condition.

Like a lot of other animals, goldfish live off their fat during winter.  Whatever fat is left after winter is used to produce eggs.  If there isn’t enough fat left after winter, your fish are unable to get into spawning condition, especially the females.

Tip:
This is the reason why goldfish that have survived a harsh winter, then suddenly die in early spring as they try to get into pre-spawning condition without the necessary fat reserves.

To have a successful goldfish spawning, the fish seem to need a period of hibernation or have water cold enough to produce low activity.  Where this doesn’t occur such as in Hawaii, the spawns are light and the fertility low.

With the start of spring, and assuming your parents have come through winter in good condition, now is the time to start feeding the breeders with live food such as earthworms and bloodworms as well as their usual high quality dry or gel food.  Live food seems to accelerate the production of eggs and milt.

Goldfish under one year old can’t be sexed.  If you purchase young fish to grow through to adults, I would purchase about six as a minimum.  Purchase them 12 months prior to when you want to breed them, at the latest before late summer.  This gives you enough time to condition the fish during autumn.  The fish would have to be of an adequate size already as you would only have a few months to get any growth before winter.

I have noticed that females are usually larger than males of the same age, so be careful if selecting your specimens based on size.

You now need to make your final selection of males and females.  Ideally, you should have three males to one female to increase the odds in your favor for a good goldfish spawning.

This is ideal but I have often only had one pair to breed after eliminating those fish with too many faults.

If you haven’t bred them before, you will need to select your best specimens as you identify male and female.  Careful observation in early spring is the key to identifying male and female differences. 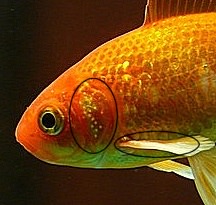 In comparison to a female of the same variety, the male should look slimmer, but unless the fish are slim bodied varieties, don’t rely on this characteristic as I’ve seen males with rounder body shapes than the female.

The female will look more rounded in the body, but as I said earlier, this can’t be relied upon with rounded bodied varieties.  This is really only obvious in the goldfish varieties that have slim bodies such as Comets.

In the males the opening is small, oval, and recessed while in the female the opening is circular in shape and appears slightly raised.  The differences are most apparent the closer the fish are to breeding.

﻿As soon as you can distinguish male and female, separate them to avoid an unplanned goldfish spawning.﻿

You should now have your selected parents separated male from female, feeding them heavily with live foods and high quality gel or dry food.

It will pay not to have plants or similar objects in the aquarium or pond that the females are in as they may stimulate the female to drop her eggs prematurely, especially if she is very close to laying.

My suggestion is to remove the males from the females, leaving the females undisturbed.  Moving the females to a new environment with fresh clean water is a sure fired way of stimulating goldfish spawning activity, (which you don’t want just yet).

You are now ready to start preparing the equipment you are going to use to collect the eggs and hatch the fry.  Go to the page on How To Breed Goldfish to learn the final steps to have a successful goldfish spawning.