Enemies change depending on the fish's size and age.

Most goldfish enemies are removed if they are kept in an aquarium, but ponds are treated as natural bodies of water by animals and insects, therefore a possible source of food.

An obvious enemy is humans in the form of children.  There isn’t much that can be done apart from keeping the pond cover locked and/or installing surveillance cameras if the problem is reoccurring.

This isn’t usually a problem unless the pond is located near a natural water source.  Eels are known to travel across land if their water source starts to dry up.

A bigger problem is fish species that are introduced into the pond by the owner.  These species could include:

Some of these species grow rapidly, or very large if given the space.  Goldfish can be left behind in the food race and become part of the food chain themselves.

Only goldfish with a single caudal should ever be kept with other species.

All these amphibians are potential fish eaters.  Frogs are hard to keep out of a pond unless a tight fitting cover is fitted.

Apart from becoming food for the goldfish, and competing for food, tadpoles aren’t a direct threat unless they are cane toad tadpoles.

The cane toad, (Rhinella Marina), is a native of Central and South America and it has been introduced to many countries in the mistaken belief they would control insect pests. They have become the bigger pest in countries such as Australia.

The eggs and tadpoles are very toxic to any animal ingesting them.﻿

The natural enemy of fish, cats fall into two categories:

The hunters can clean out a pond very quickly if it isn’t covered and we have trained our goldfish to come to the side for feeding.

Another natural enemy, fish eaters include Kingfishers and Herons. 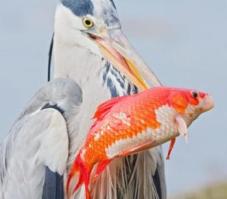 These efficient killers will clear a pond in hours. The bright colors of the fish make them easy targets. As can be seen in the distressing image here, even large goldfish are not safe.

The bottom line for ponds is they must be covered, even though it does spoil the look. Otherwise, you must be prepared to re-stock whenever a stray cat or roving bird spies an easy meal.

All the adult goldfish enemies above also attack fry, but fry under a month old would be too small for most to bother with.

The enemies below specifically target fry as a food source.

The first enemy fry will encounter is their parents. Eggs, and later fry are actively hunted after spawning has finished. 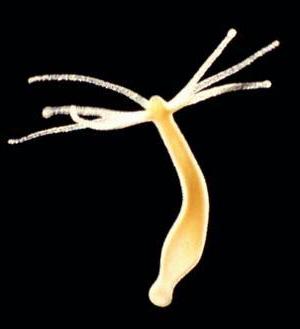 Hydra are a fresh water polyp that multiplies asexually by growing buds in the body wall which separate when they are mature.

They have eight tentacles that catch anything that brushes against them, similar to jellyfish tentacles.

Fry under two weeks of age are killed by Hydra.

Hydra are found in natural bodies of water.  They are usually found where natural fry food such as daphnia live.  If you gather or purchase daphnia, check very carefully for Hydra.  Before establishing my own cultures, every time I purchased daphnia, they came with Hydra.

There are many insects that live in water as adults, larvae, or both and feed on small fry. These include:

The problem with these insects is that they are winged and therefore very mobile.

A pool full of aged green water that has been seeded with daphnia will sit for a few weeks before the culture is ready for fry.

This is a magnet for these flying insects.

The safest option for any pools seeded with daphnia in preparation for your two week old fry is to temporarily cover it with fine mesh. Leave it in place until the fry have been in the pool for two weeks. At a month old they are starting to get too big for most insects and their larvae, and will eat any eggs laid in the pool. 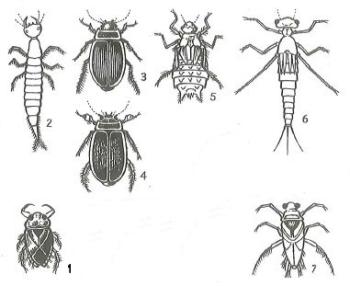