Velvet is a protozoan parasite similar to Ich. 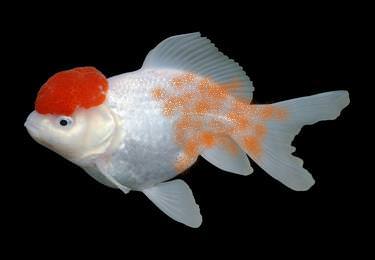 Oodinium or Velvet disease is so called because infected fish have a light tan velvet like coating over their bodies.  It is also known as Rust disease.

Velvet has a free swimming stage when it seeks out a suitable host.

Velvet is not normally considered a goldfish disease, but in the warmer months it can be transmitted from an infected tropical fish source.

The Velvet parasite is much smaller than the Ich parasite, and is almost invisible on a gold colored fish.  The parasite shows up quite clearly on light colored fish as a powdery, light tan coating.

Goldfish that are heavily infested have a hazy appearance, and swim horizontally in a listless manner near the surface.  They will often scrape against objects in the aquarium trying to remove the parasite.

The infestation usually starts at the gills and rapid gill movements will be an indication there is a problem.

A Velvet infestation is caught from an infected tropical fish source.

This usually happens when un-sterilized nets are used between aquariums in pet shops.  It is highly contagious.

If you don’t have contact with any tropical fish, and new arrivals are quarantined, it is unlikely your goldfish will ever contract the disease.

The first thing to do is move the goldfish into the sickbay with a mild salt bath of two teaspoons of Aquarium salt per gallon. Then add further treatments as listed below.

Copper based chemicals are the treatment of choice.

Malachite Green can be used. Buy from a pet shop or Amazon and follow the directions on the container for the appropriate dosage.

Another good option is Fritz Aquatics Mardel Coppersafe which also controls other parasites such as Ich (Ick), anchor worm and lice.

It can be used in a set up aquarium as it is claimed not to interfere with the biological process of filters, discolor the water, or harm plants, but it is toxic to invertebrates and some snails.

There are reports it is toxic to some catfish species so I would only use it in a sick bay, not in a community aquarium.

Another treatment option is to make a solution of one part copper sulphate to two million parts water.  Immerse the infected fish in the solution for one to two minutes.

This treatment usually cures within 24 hours.

If your water is slightly acidic, an excess of copper may enter the water.

If the fish starts to show distress by hanging at the surface with its gills distended, remove the copper pennies and replace one third of the water.

The fish should recover within a short time.

The parasites can only survive without a host for 24 hours, so as long as the aquarium is left empty of fish for a few days, it should be safe to re-introduce them after treatment. Otherwise a full sterilization of the aquarium and equipment will be required.