Ich (Ichthyophthirius multifiliis) or white spot disease is one of the easier Goldfish diseases to diagnose. 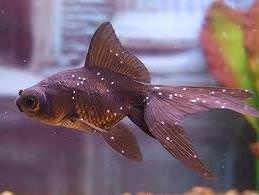 Goldfish Ich disease, or as it is sometimes incorrectly called, Ick disease, is caused by a protozoan parasite.  It is one of the most common parasites of aquarium fish.  The parasite penetrates the skin surface of the Goldfish and feeds on its tissue and blood.

The irritation of the embedded parasite causes the epidermal (skin) cells to proliferate and form the characteristic small pinhead size white spots that appear on the fins and body.  They are more easily seen on dark colored fish but are obvious when they start appearing on fins of lighter fish.

Affected fish will isolate themselves, have clamped fins and become lethargic.  Most fish will develop a peppering of white spots on the body and fins.  Some fish will display breathing difficulties.

A danger of this disease is it doesn't always display the characteristic white spots.  It can completely encrust the gills of a fish yet the fish may not display a single white spot anywhere on its body or fins.  The only indication it has the disease is an increased breathing rate.

The disease is normally considered a tropical fish disease but it is also found in the cooler water that Goldfish inhabit.

Goldfish can carry Ich in small numbers without showing signs of disease or the characteristic white spots.

An outbreak of the disease is frequently caused by a sudden drop in water temperature, or poor water quality causing a weakening of the fish's immune system allowing the parasite to proliferate.

A more common cause is its introduction into the aquarium from a new arrival that hasn’t been quarantined.

Ich disease has five stages in its life cycle:

The speed of this cycle depends on water temperature.  At 75-79 degrees Fahrenheit (24-26 degrees Celsius) the entire life cycle is completed in about four days.

If the disease is allowed to progress too far, the white spots will start to cover the head and gill surfaces causing breathing difficulties that eventually leads to death.

The infected fish cannot be treated for Ich as the parasite is embedded underneath the skin.  However, the parasite can be killed once the cyst breaks releasing the juveniles into the water.

The first step in treatment is to raise the water temperature gradually into the 80s (27oC+) using an aquarium heater.  This does two things:

There are several treatments that can be used. The Goldfish should already be in a mild Aquarium Salt bath.

My preferred method of treatment is a combination of raised water temperature and a mild salt bath with Methylene Blue or Malachite Green added.

I gradually increase the salt content from one to two teaspoons per gallon.  I then add the Methylene Blue or Malachite Green.

The raised water temperature should kill the juvenile cysts, the  Aquarium salt will boost the fish's immune system, and the Methylene Blue or Malachite Green will stop any bacterial or fungal attack of the damaged skin of the fish, as well as killing any cysts that survive the higher water temperature.

When all cysts have disappeared after a few days, change 50% of the water without adding any chemicals.  Make sure the water temperatures are the same.

Turn off the aquarium heater and keep making daily water changes until all traces of the salt and chemical are gone.

As long as the fish is active and feeding well, it can be returned to its (sterilized) aquarium once the sickbay water temperature is down to normal.