Goldfish ulcer disease shows as a red or pink/red open sore on the body. 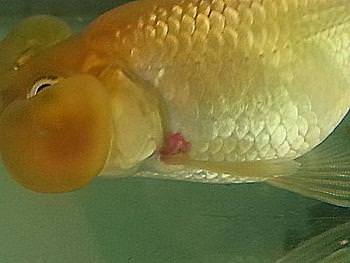 Ulcer on Water Bubble Eye above the pectoral fin

Ulcer disease is caused by bacteria attacking the skin and tissue causing it to become inflamed as it is eaten away.  The bacteria responsible are of the Aeromonas, Vibrio or Pseudomonas varieties.  These bacteria are always present in aged aquarium water.

The bacteria are able to penetrate through the protective slime coating because of parasite attack or the fish has been injured in some way.

Any of the common parasites such as anchor worm, lice or flukes will give bacteria the opportunity they need.

Ulcers are common in carp species such as Goldfish and Koi.

Poor water conditions which lead to stress and a weakened immune system will aid bacterial attack.

Sometimes a fish in perfect conditions and in perfect health will develop an ulcer but this is unusual.  In these cases it is generally an injury that causes the ulcer.

The ulcer appearance is usually an open sore on the body which can have a pink/red to white center surrounded by a blood red or white edge.  This is not to be confused with red pest disease or ulceration of the gills which is a fungal disease.

Ulcers can be shallow or extend into muscle tissue and in severe cases into internal organs.

If left untreated, an ulcer will get progressively worse until it kills the fish.

Before starting treatment, first identify what caused the ulcer.

Ulcers are often caused by parasites, and if this is the case they must be removed before treating the ulcer.

Aquarium Salt will not kill most common Goldfish parasites. For flukes a Praziquanel based medication is best, and for lice and anchor worm something like Microbe-Lift Lice and Anchor Worm treatment will need to be administered.

The exception to this is protozoan parasites which can be killed using Aquarium Salt while treating the ulcer.

Treating the ulcer is a Three step process:

Topical swab - Hydrogen peroxide at 3-6% solution, iodine, mercurochrome or potassium permanganate is used to swab the ulcer using a Q-tip (cotton bud) dipped in the solution.

Be very careful if the ulcer is close to an eye or gill.  Place the fish in a net and hold it so the solution will run away from the eye or gill rather than into it.

The ulcer should ideally be cleaned out of dead material (abraded) to get at the bacteria underneath before administering the treatment, but if the ulcer is large, the fish should be anesthetized first.

YouTube Link
The YouTube link below shows a Koi being treated for an ulcer near the eye.
Note that the cause of the ulcer was diagnosed as body flukes (gyrodactylus) which are known to carry bacteria on their haptens which are used to latch on to the fish.

Salt bath - After the ulcer has been swabbed, place the fish in a 0.3% Aquarium salt bath (3-4 grams of salt per liter, one tablespoon per gallon).  This will kill any protozoan parasites and suppress fungal attack.

If the ulcer is responding to treatment, after a few days the inflammation should decrease or at least not get any worse.  Don't re-swab the ulcer as it will damage healing tissue.

If the ulcer seems to be getting worse, re-swab the ulcer and wait for a few more days.  Keep repeating this until the ulcer starts to respond and consider feeding a medicated food such as Medi-gold.

As a last resort, the fish can be injected with antibiotics, which I suggest is done by a veterinarian.  If the ulcer is well advanced I would advise injection as the first step followed by a salt bath and antibacterial medication.

Feed live food or the frozen equivalent to speed up healing.

Healing speed will depend on water temperature, ranging from a few weeks to months for large ulcers.

Scarring may occur if the ulcer is large or deep seated.