This worm is a free swimming crustacean that attaches itself to a fish and feeds on its blood. 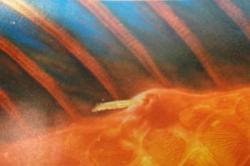 Anchor worm embedded in a goldfish

Anchor worm (Lernaea cyprinacea) is a member of the Copepod family, a family of very small aquatic crustaceans.

They get their name from the shape of the head which resembles a ship’s anchor.

The worms burrow their heads into the bodies of goldfish.  The most common places to find them are behind a pectoral fin or right behind the dorsal fin.  If the infestation is heavy, they can be found anywhere on the fish.

When the worm first attacks the fish, it shows as a bony splinter protruding at an angle.  It is visible to the naked eye but can easily be missed.

As the fish’s defense system starts to react to the worm’s presence, a bloody red spot will show with a small white thread protruding from the center.

Infested fish introduced into the pond or aquarium is the usual source.

It is an insecticide that is soluble in water, comes in liquid or powder form and is sold in different potencies ranging from 40 to 98%.

Dipterex isn’t stable in water and breaks down after a few days.  The worm eggs survive the treatment but emerging parasites are killed by the follow-up treatments.

If your goldfish are in an aquarium, picking the worms off the fish with tweezers is the easiest solution.

Anchor worms hold on tenaciously and small pieces of flesh can come with the worms.  Dab the worms with a cotton bud that has been dipped in a 50/50 solution of Kerosene and Turpentine.

Be very careful if the worm is near an eye.  This process may need to be performed more than once.

Watch closely for toxic shock, usually exhibited by the fish turning on its side or gasping at the surface.

Move the fish into a mild salt bath of two teaspoons per gallon of non-iodized salt for a couple of days to make sure wounds don’t become infected or any more worms appear.

.
As its name suggests, it can also be used for the treatment of goldfish lice as they are also a crustacean.

Don't forget to sterilize the aquarium completely (including plants) to kill any adults or nauplii.